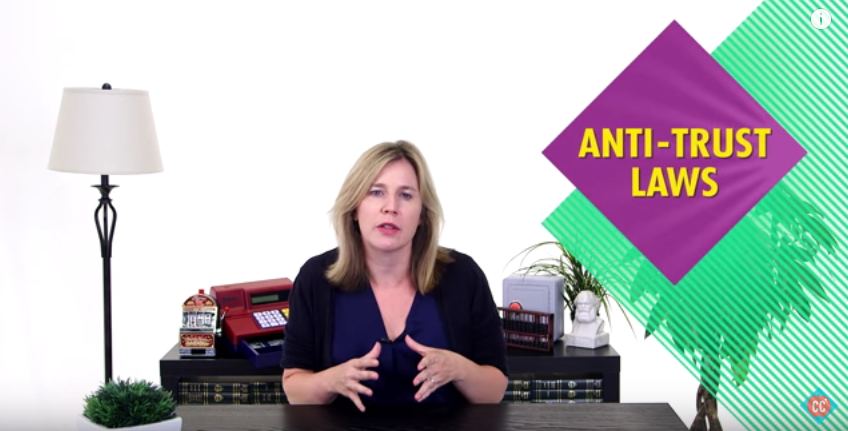 This week, Crash Course talks about monopolies and competition.  This episode was a mixed bag with plenty to comment on.  Let’s get to it:

Before beginning each episode, the hosts of Crash Course give a quick introduction to the subject of this week’s video, followed by the opening credits.  This week’s introduction was a little confusing: 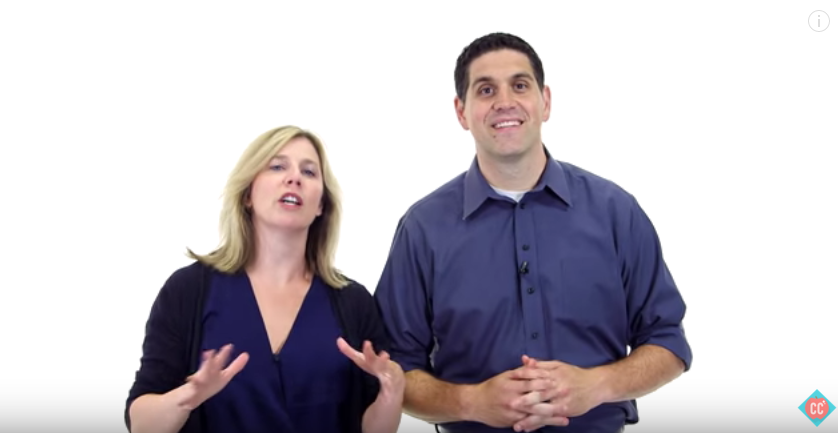 Today we’re going to talk about monopolies! Which are terrible, illegal, and only serve to exploit helpless consumers, except when they’re delivering essential services that competitive free markets kind of fail to deliver.

So from this definition we can figure out that 1) monopolies would not occur in a free market and 2) monopolies are good for delivering essential services because free markets fail to provide them.  We’ve already talked about the concept of Market Failures in Episode 21.  In short, sometimes markets, despite being more efficient than the public sector, do not provide certain goods because governments already provide them for “free” (see: tax revenue).  For example, why would you pay for a more efficient private fire department when you’re already forced to pay for one?  The “free” public option distorts eliminates the incentive for entrepreneurs to enter the market.

The Good: Barriers to Entry 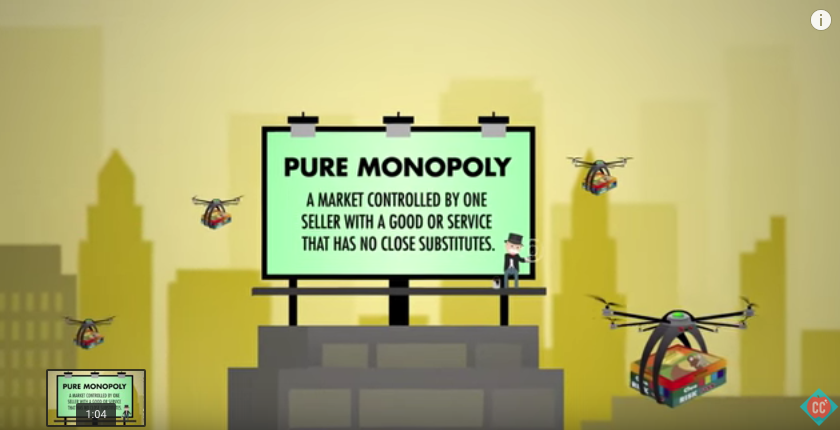 The true power of a monopoly comes from its ability to keep competitors out of the market. Monopolies are able to erect obstacles that economists call barriers to entry. 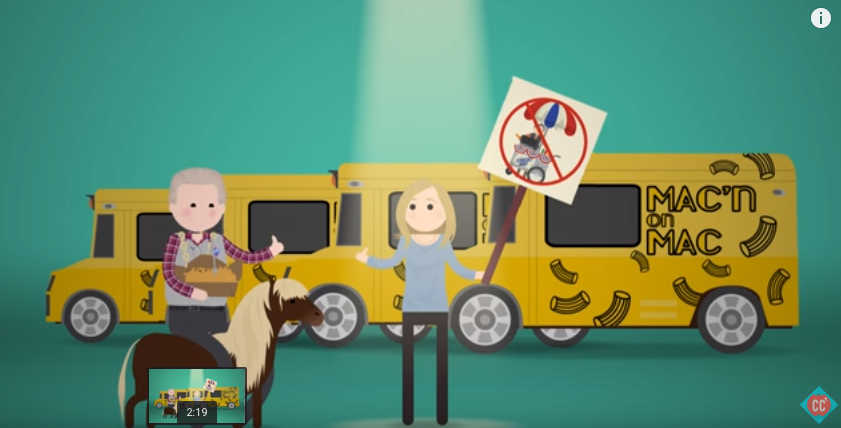 Imagine a city where there are a limited number of licenses for food trucks, and I own all of them for my fleet of artisanal macaroni and cheese trucks. I also know the mayor, since he’s a big fan of artisanal macaroni and cheese. If I can convince the mayor to ban traditional push cart food vendors, with their shwarma and their bacon-wrapped hot dogs, I’ll have a monopoly on street food.

I’m not increasing profit by producing more stuff. I’ve influenced government regulations in such a way that anyone who’s hungry, but doesn’t want to enter a building, has to buy food from me. This is sometimes called crony capitalism.

Crash Course’s example does not show the monopolies themselves creating barriers to entry for competitors, but rather using the power of the government regulation to crush competition.

Monopolies can restrict output and charge higher prices without worrying about competitors. This is why most economists support anti-trust laws that promote competition and outlaw anticompetitive tactics.

This is the quick-and-easy justification for antitrust laws.  However, some schools of economic thought take issue with this.

These schools argue that as a company with monopoly power increases its prices (or restricts supply arbitrarily), the greater the incentive for a competitor to enter the market to provide the good for a lower price.  For example, if Google Search (which has a dominant market share) started charging $1 per search, it would encourage Bing, Yahoo, or a new competitor to move into that market.  This would apply to monopolies as well as oligopolies, so it does not matter how much market share a company has in the market, since there is always the threat of a new competitor entering, even if there are high barriers to entry.

In the above scenario, we are assuming that the companies are functioning in a free market, and that there are not any legal barriers to entry for the other companies.  If there is a law that there can only be so many search engine licenses, this would prevent new competitors from entering the market. 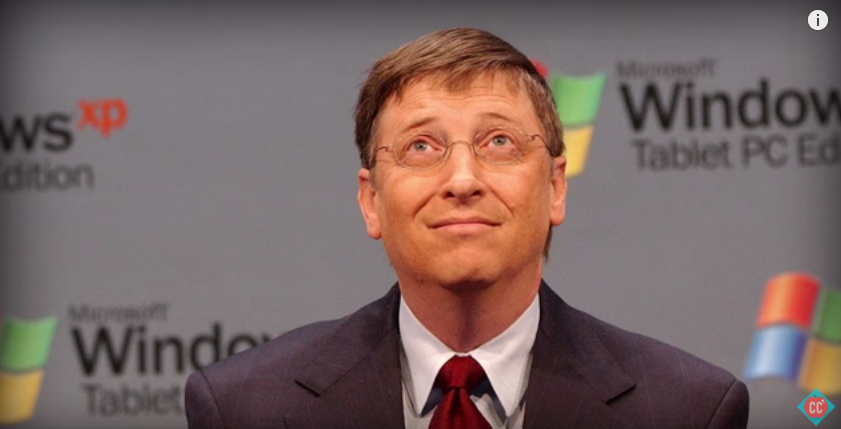 In the late 1990s, Microsoft was accused of pressuring PC manufacturers to pre-install Microsoft’s web browser, Internet Explorer, and exclude their main browser competitor, Netscape. Regulators busted them, and almost busted up the company.

Companies in different markets often make deals with each other.  For example, Pepsi and Taco Bell agreed that only Pepsi products would be sold at Taco Bell.  Is this also monopolistic behavior?  And if Microsoft had a main browser competitor, then they wouldn’t be a monopoly, would they? 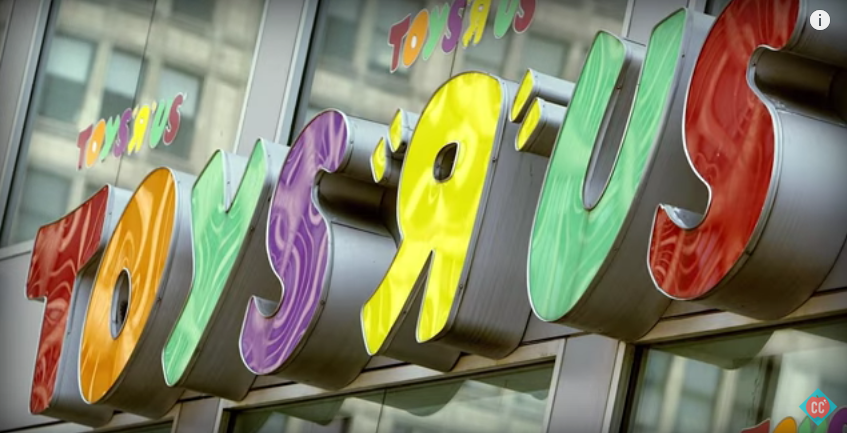 Even Toys R Us! It’s gotten in trouble for conspiring with toy suppliers, like Hasbro and Mattel, to stop the manufacturers from selling certain toys to other stores.

Examples of exclusive deals between companies are numerous and simply a part of business relationships.  From Crash Course’s explanation, I do not see the difference between corporate contracts and bad monopolistic behavior. 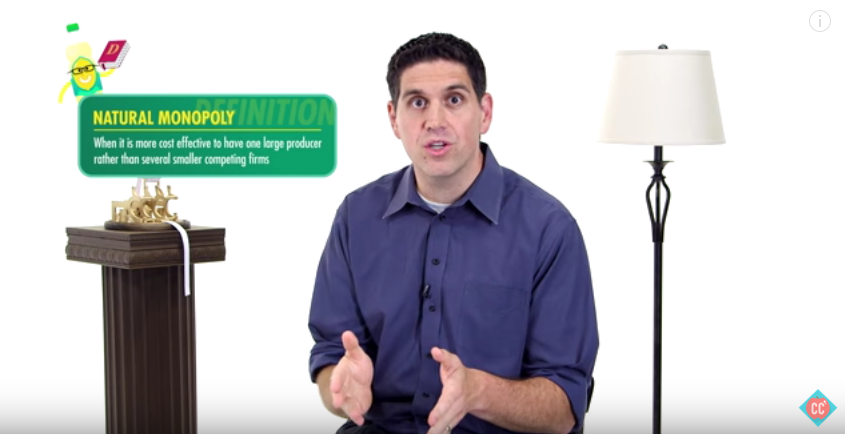 Natural monopolies are special situations where it is more cost effective to have one large producer rather than several smaller competing firms. The best examples are public utilities in markets such as electricity, water, natural gas, and sewage. They may be privately owned or publicly owned but either way, they remain a monopoly because the government limits competition.

The better definition of a natural monopoly is one that exists because of high fixed or start up costs.  They are highly regulated and often completely managed by government.  Competition in these markets are usually not allowed. 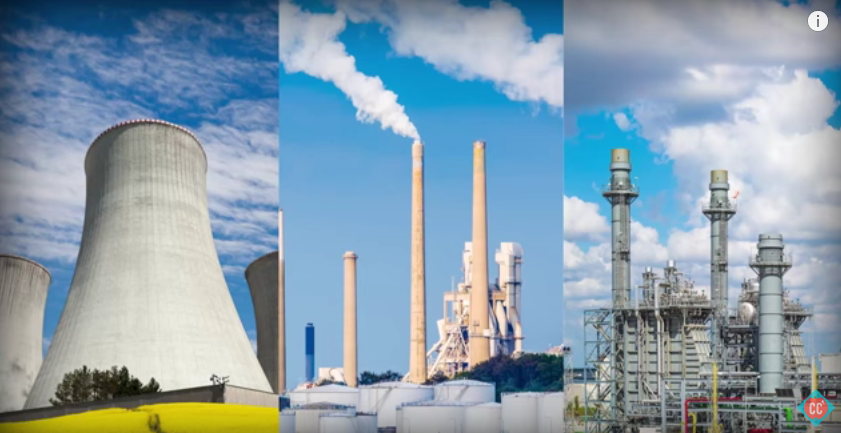 I mean, if there were three competing electric power companies in one city, that would mean building three different power plants, and running three sets of power lines through the streets.  The result would be higher costs. So, in this case, it would be cheaper to have one electric company because they have economies of scale.

I’ve mentioned this before, but since we don’t know what a free market in power would look like, everything is speculation.  Especially today with more people going off the power grid, we are seeing how the power market free from government monopolization would be, and it’s not as horrific as many speculate.

Competition encourages cost-lowering efficiency.  With an active market in power, companies would be competing with providing the best service for the cheapest price.  In the current market, the main incentive is to not attract any negative attention from the regulators.

that would mean building three different power plants, and running three sets of power lines through the streets

Are people really concerned with how many power plants exist or how many power lines there are?  If the argument is that fewer competitors creates a better market, these arguments are really grasping at straws here.  Why not make the same argument for automobiles?

Right now there are multiple factories producing cars and motorcycles, with multiple dealerships taking up space in every town.  Why not pass a law that only allows for one automotive producer?  It would save so much in cost!

While Crash Course did have some good nuggets in this episode, it failed to explain a coherent standard for when a central power should allow monopolies, create them, or destroy them.  As with most subjects, Crash Course sums things up with “monopolies are sometimes good, sometimes bad, but it’s complicated.”

The use of government force to regulate or manipulate businesses activity is significant, and there should be a division between “natural monopolies that occur in a free market” and “government-created monopolies” because the way an economist looks at them will be different depending on the monopoly.